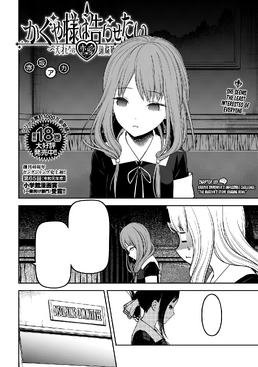 The Shipping War involving Yu, Miko, and Tsubame has been started.

It seems like Shirogane has caught himself in a bit of a dilemma considering his position as the Council President. In addition to that, Kaguya’s proposal of “keeping distance” is clouding his judgement as she thinks Shirogane may be biased.

He then runs into Ilno at the council office. With Kaguya and Fujiwara being absent, Shirogane decides to ask Ilno point-blank about her love fot Ishigami. This situation then becomes a huge mess – while Shirogane attempts to ask her about her compassion for Ishigami, Ilno thinks that Shirogane is ‘chasing after her.’

After some exchange of witty dialogues, Ilno tells Shirogane that she knows about him and Shinomiya being a thing now. She further assures him that she won’t butt in between the two. Willingly (or unwillingly) Ilno directs the topic of conversation towards ‘heart sutra’ and distracts Shirogane.

She says that she hated Ishigami since his nature and personality is practically against everything she stands for. But there’s an “unknown feeling” that makes her eyes misty when she hears about Ishigami x Tsubame. The chapter ends with Ilno asking for Shirogane’s help.