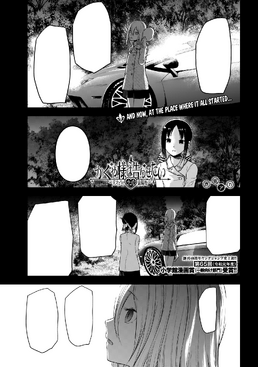 The class trip comes to a close.

The chapter picked up after Kaguya and Hayasaka’s heart to heart conversation. Since Hayasaka’s hair was cut in the last chapter, she didn’t want anyone seeing her hair like this.

Therefore she left the school trip saying, “I’ll do what I want since I’m finally free.” Upon returning to their classmates, Kaguya and Shirogane try to put up with the lies Fujiwara told everyone about their absence to cover for them.

To talk about everything that happened, Shirogane wanted to spend some time with Kaguya alone, so he blew off his friends by saying he needed to take care of something.

Using Shirogane’s absence as an excuse, Toyosaki and Kazamatsuri join Kose and Kino with the intention of “going for the grand prize.”

After discussing everything that happened, Shirogane and Kaguya tour the city. As promised, Shirogane goes back to the souvenir shop to buy something to show his gratitude to the old man for helping him out.

After the trip ends and the dust settles, Kaguya is seen back at the Shinomiya Mansion, where Hayasaka meets her and asks her to go to school together with her. Kaguya gladly accepts, saying that she wanted this for a long time.