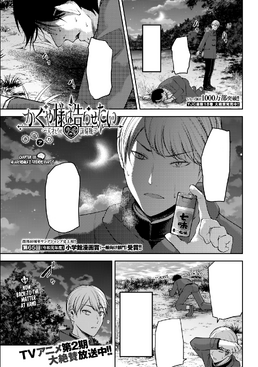 Kaguya and Ai talk out their differences and forgive each other.

The chapter starts off with Shirogane breaking free from his captor’s hold. One of Unyou’s subordinates tries to attack Kaguya for hitting Unyou, but Hayasaka steps in.

She takes out a knife concealed in her dress, cuts off her hair to break free from the captor holding, and then proceeds to subdue the attacker. At this point, Unyou orders his people to lay down their weapons as their plan to recruit Hayasaka had failed the moment Kaguya decided to forgive Hayasaka.

The chapter is partly narrated by him as he sees Hayasaka and Shinomiya talk it out at the lake’s pier after this entire mess. During this emotional talk, we see the reason Hayasaka picked this mountain top.

It is the place where Kaguya asked Hayasaka to be her friend and stay by her side, and Hayasaka agreed. This place, where their relationship as Master and Servant truly began, is sadly also the place where it ended. Because Kaguya ended their contract and freed Hayasaka from her duties.

The chapter ends with both of them crying. Kaguya, because she feels sorry that she didn’t see this big burden on Hayasaka before, and Hayasaka because she truly felt understood for the first time in her life.