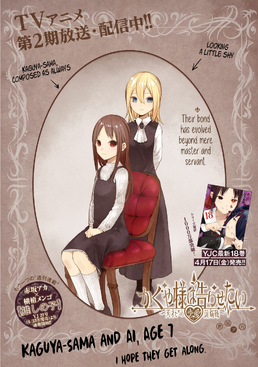 The chapter started off with Hayasaka’s flashback. Oko, the apparent heir to the Shinomiya wealth, hired Hayasaka and instructed her to keep tabs on Kaguya as he wanted as much dirt on her as Hayasaka could find.

We are shown Hayasaka and Kaguya meeting on the day she is employed. Apparently, Kaguya had been waiting for this day as she remembers the time she spent with Hayasaka in her childhood.

The chapter continues on with Hayasaka self-loathing while remembering the times she relayed information to Oko. She ends her flashback by reminding herself of the only thing she is afraid of — Kaguya hating her.

Kaguya’s elder brother asks Hayasaka if she will continue spying on Kaguya for her. When she refuses, he calls Kaguya up and tells her the truth. Kaguya replies with, “Do whatever you want.” This is when she enters the scene and explains that she was saying that to Hayasaka.

She asks Hayasaka if she would like to explain herself, because, for the first time in her life, she wants to forgive someone but doesn’t know how to do so.