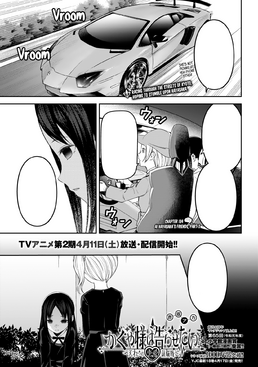 The chapter picks up where chapter 183 left off. Kaguya is trying to decipher the location where Hayasaka plans to meet up with her. She races around town with Hayasaka’s mother as she reminisces about her past, trying to figure out where it all began.

She remembers her mother’s funeral, where she talked to Hayasaka about being an illegitimate child. That was when she decided to never make friends unless she trusts them. Kaguya and Hayasaka’s mother visit that location, however, Hayasaka is not present there.

The chapter switches over to Miyuki borrowing a motorbike from an elderly person to shake off the guys following Hayasaka.

He promises to bring back the bike with a full tank and talks to Hayasaka about how he asks for help when he needs it and helps others when they need it to maintain a balance. Since Miyuki doesn’t have a license, Hayasaka offers to drive.

Kaguya then reminisces about the time Hayasaka went out alone in the rain because she was upset. They visit that location as well, however, Hayasaka is nowhere to be found.

Hayasaka then reaches the location of the meetup – a hill owned by the Shinomiyas. However, Miyuki discovers that they were being tracked this entire time by a GPS tracker placed by the guy Hayasaka ran into in the last chapter.

They are then apprehended by the people chasing Hayasaka. This scene is followed by a short, devastating flashback which reveals that Hayasaka was employed with the sole purpose of spying on Kaguya!