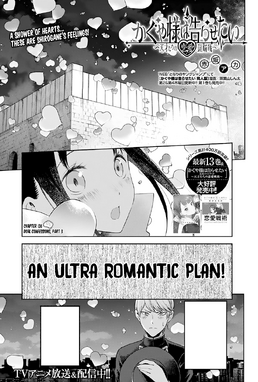 Dual Confessions, Part 3 is the one hundred-thirty sixth chapter of the Kaguya-sama wa Kokurasetai manga series.

Miyuki reveals the extent of his plans and ask Kaguya to attend Stanford with him. Kaguya then kisses him as her prize to finding the "thief".