I Want to be Invited to a Movie 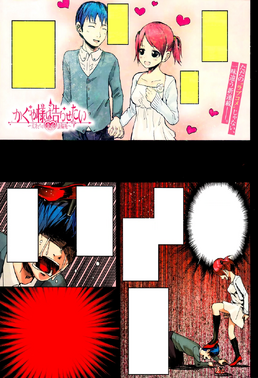 I Want to be Invited to a Movie is the first chapter of the Kaguya-sama wa Kokurasetai manga series.

Many people say love is the most wonderful thing in the world. But in truth it’s an imbalance and war for dominance to the other party. In short the one who falls in love first loses.

Shuchiin are built by the Noble and warrior classes of the country to educate future leaders. Students in this prestigious school are led by the Student Council. Kaguya Shinomiya, Vice President of Shuchiin. Total assets two hundred trillion yen. Daughter of Ganan Kaguya, head of the largest business conglomerate in the country.  Kaguya expresses excellence in all aspects. A genius.  At her side is Miyuki Shirogane.  Student Council President of Shuchiin. Intelligent and top S+ student in Shuchiin. Competes neck and neck to students all over the country.  Kaguya respects his focus in his studies. He also dons the Fourragere on his neck with two hundred years of Shuchiin history. Students think they are dating but both of them while entering in the Student Council chambers.  They both agreed it’s just foolish gossip since there in that “age”. Shirogane thought to himself if Kaguya were to date him it’s not like he would not consider it. Kaguya also thought to herself that she is the heart and soul of the country and would not date a lowly commoner but says that Shirogane has a teeny chance if he gave his body and soul to Kaguya.  They are both trying to make the other one confess so the war begins. The Student Council Secretary Chika Fujiwara is clueless about the high intellectual war happening inside the chambers. Fujiwara won a pair of movie tickets to a romantic movie but cannot watch it because of family restrictions. She brought the tickets to ask if they want them to go in their place. Fujiwara also stated that if a boy and a girl watched this movie together they will end up as a couple. Shirogane thought that if he invited Kaguya it would be like confessing his feelings. The rules are the first to fall in love loses. He made the move to ask Kaguya what she would do. Kaguya saw what he’s up too. Kaguya stated she could just reject the offer of free tickets but that would ruin her effort. She created a fake prize and put it in Fujiwara’s mailbox. She can’t let that happen though. She played innocent and says she wants to experience romance. Shirogane is cornered but Fujiwara asked them that if they don’t want the romantic movie they can have the comedy movie instead. The casualness of Fujiwara made the two geniuses to chaos theory. Their brain power has already inflexed. In term they need fuel which is food to make an attack and a sweet bun is a source of power. The one who eats it is the victor. Fujiwara took the sweet bun and ate it. Both lose in this battle.